¤ Home » Business » How to influence people to strive willfully and work to achieve common group objectives and goals?

How to influence people to strive willfully and work to achieve common group objectives and goals? 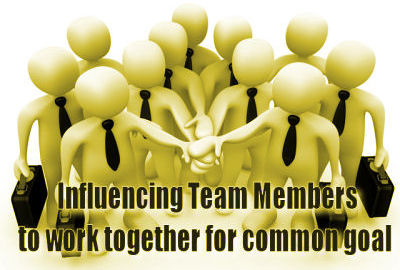 A big challenge faced by managers in any company is keeping their group/team together and ensuring that each and every group member is focused toward achieving the common goals and objectives assigned to the group by the company.

A manager is successful only when he/she is able to extract the maximum efficiency from each group member. Especially in today's business environment when objectives are becoming more and more difficult to achieve and teams are becoming smaller due to cost constraints. A manager cannot afford to allow laxity in even a single group/team member.

In this article I will use the word team and group interchangeably. They both essentially mean the same.


What do we mean by group objectives?

Group objectives imply that a group of company employees collectively work together to achieve a common set of objectives within specified time frame(s). Essentially, the group would work to achieve targets assigned to them. A company would have a number of different groups or teams, each working on a different set of objectives. All groups effectively work together in this manner to contribute to achieve the broader goals of the company.

For example, in my company, which is a web services company, I have various groups or teams such as the sales team, the marketing team, the technical support team, the server administration team, the development team, and so on.

The sales team's objectives are to ensure that each sales order is executed within 4 hours (a defined delivery time frame) and that customers do not face any difficulty in placing orders and getting started once the order is executed.

The marketing team's objectives are to get customers to buy, and achieve defined monthly product wise sales targets.

The server administration team's objectives are to ensure that all our services are up and running 99.9% of the time. They take care of hardware and software issues and failures and resolve them quickly to achieve 99.9% uptime.

The technical support team's objectives are to interface with the customers on day to day issues they may face and help resolve within minimum time frame definitely not exceeding 24 hours.

The development team's objectives are driven by requirements of individual projects and their time frames set by the customer.

All of the above teams or groups are working to achieve their own set of objectives and in effect contributing to achieve the larger goals of my company, viz. the projected targets for turnover, profit, growth, etc. in a given financial year.


The size of each group/team would depend upon the size of the company. In smaller companies, each team may comprise of 3-5 members headed by a manager, and managing them to work toward common objectives is easier. However, in larger companies where we have ten or more people in a group, it is quite common to find a few members who would take it easy as they know that even if they work less the group will be able to achieve its objectives as someone else will work harder to fill in the gap. However, this is not what the team manager desires. Such lethargic or less committed people can negatively influence other team members. To be successful the team manager must ensure that each and every individual in his/her team is willfully motivated and strives toward the group's goals and objectives. Only when this happens, can the team as a whole become better and better with time and will be ready to take up bigger challenges and handle crisis situations successfully.

Hence, it is vital for the team leader/manager to understand how to influence team members to strive willingly in order to have a more efficient and successful team.

Ways in which you can influence your team

Here are some of the ways in which you can influence your team members to strive willingly toward attaining group objectives. The points discussed here are by no means exhaustive. I have only touched upon some of the important aspects of a manager's functions.

Teams often fail because they do not have clarity about their tasks and roles. The first and foremost task of the team leader/manager is therefore to define the goals and objectives of his/her team and define clear cut roles and responsibilities for each team member. Quantification of targets is important. This must be well documented and also clearly communicated both verbally and in writing, to each team member. Each team member will have his/her own set of specific roles and targets.


Set realistic and agreed upon goals

Yet another important aspect is that the goals and targets that you set for the team as a whole and also for each member, should be done in consultation, should be realistic and achievable within the defined time frame, and should be acceptable to the team members. Realistic goals do not mean that they should be easy to achieve. There must be an element of challenge to keep the adrenalin flowing and create a spirit of competition. As human beings we like challenges and it has been proven by research that human beings tend to perform better when they are challenged. An easy target can create complacency and procrastination.

Team members will feel a sense of commitment and accountability only when they have participated and agreed upon the set targets. For instance, successful companies ask each sales person to prepare his own forecast and targets, and that data is collated to make the group target. Only minor tweaking is done to adjust the target keeping in view the overall company's sales target.

You must have the right mix of members in your team whose skills and capabilities match up with their work requirement and complement each other for collective success. Having the wrong people in the wrong slot will never work. Also, the team must be rightly sized.

You may also need to identify the training needs of team members so as to enhance your team's capabilities and prepare them to embrace changing needs and change in technology.

As a team leader, once you have defined the goals and objectives of individual team members and the team as a whole, you need to sit down with your team to work out a detailed execution plan with clear cut intermediate milestones. There should be action points which should clearly spell out who will do what at various stages of execution. Deadlines should be documented.

Involving team members in this exercise is yet another way to create interest and motivates members to take up the challenge ahead. Document the plan and distribute a copy to each member. Each member should have a clear understanding of what they are required to do. They should also know what tasks and responsibilities are assigned to other team members, viz. what they are not supposed to be doing.


Spell out the decision making authorities

Each team member should be clear about their decision making authorities and should know when and for what they need to seek approvals from superiors and from which superior. Support your team members by giving them what they need for execution. You may also give them limited authority.

When a team member approaches you with a problem situation and seeks help/decision, ask him what he thinks should be the right way to overcome the situation. He surely would have some idea of the solution but may not be confident. Weigh his suggestions and if required add your inputs but let him get a feeling that he arrived at the solution and not you. This will go a long way in influencing your team members to remain motivated and perform.

When you raise your expectations from your team members and clearly communicate the same to them, you are essentially telling them that they are good and have the ability to deliver. You are in a way communicating to them that you consider them as able. This not only increases their confidence but also motivates them to willingly stretch themselves to perform. Encourage them to think out of the box and take decisions within their assigned authority. Do not rebuke on failures, instead support them. Treat honest failures and mistakes as learning experiences. Make sure that an individual's self-esteem is not hit upon.

This is a very important point of influence. However, as a manager you should be able to gauge the true abilities of an individual and strike the right balance of expectations. Stretching it too far with unrealistic expectations can have a negative effect.


Recognize and give due credit for performance

As a manager it is your responsibility to have an objective reward system that is directly linked to individual team member's performance. Pay scales and rewards must be commensurate with qualification. This will keep your team members adequately motivated to perform willfully and you would not need to push them hard. A component of your reward system should also be linked to the overall team performance so that team members co-operate with each other and support each other in achieving the common team goals and not compete with each other in a dirty competition.

When evaluating performance of team members you must engage in a systematic two way communication process so that each member has clarity about the pay increase, bonus and other incentives he/she gets as a result of their good/bad performance. Coaching and mentoring the weak performers is also a part of the manager's job.

A team does not work in isolation. Multiple teams in an organization are working to achieve the common goals and objectives of the organization. As the manager of your team, you will often need help and support from other teams/departments. Creating a friendly and co-operative mutually benefitting relationship with your peer managers is an important task which cannot be overlooked.

In larger organizations, especially when your team involves workers who have a union, you need co-operation from the union representative so that they do not become a hindrance to your team's performance. Keeping them involved as you go along, especially during the stage of preparing execution plans, is very important.


I hope the above would have given you a perspective of how, as a manager, you can influence people to create an environment of high performance and achieve common group objectives and goals.

How to improve sales in a super market or any retail grocery & general provisions store, through effective data collection?