The term sigma is used to designate the distribution or spread about the mean (average) of any process or procedure.

The Magic: If we can't control it we are at the mercy of chance

The statistical objectives of Six Sigma can be best understood from the diagram below: 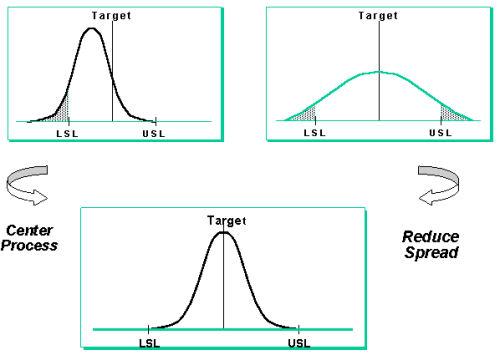 The table below enumerates the improvement possibilities after six sigma implementation.

The key features of six sigma and the process improvement possibility after implementation, vis.-à-vis. classical approach to quality improvement, is that six sigma focuses on:

To efficiently drive improvements, the focus must be on the inputs (Xs) to the process. The word sigma is used in two ways, to describe capability and to describe variation. As DPMO goes down, process capability goes up.

How is Six Sigma different from other initiatives?

Traits of a Good Manager