By the late 1970s, NSF (the U.S. National Science Foundation) saw the enormous impact the ARPANET was having on university research, allowing scientists across the country to share data and collaborate on research projects. However, to get on the ARPANET, a university had to have a research contract with the DoD, which many did not have.

This lack of universal access prompted NSF to set up a virtual network, CSNET, that supported dial-up lines and had connections to the ARPANET and other networks. Using CSNET, academic researchers could call up and leave email for other people to pick up later. It was simple, but it worked.

By 1984 NSF began designing a high-speed successor to the ARPANET that would be open to all university research groups. To have something concrete to start with, NSF decided to build a backbone network to connect its six super computer centers, in San Diego, Boulder, Champaign, Pittsburgh, Ithaca, and Princeton.

Each super computer was given a little brother, consisting of an LSI-II micro computer called a fuzzball. The fuzzballs were connected with 56 kbps leased lines and formed the subnet, the same hardware technology as the ARPANET used. The software technology was different however: the fuzzballs spoke TCP/IP right from the start, making it the first TCP/IP WAN.

NSF also funded some (eventually about 20) regional networks that connected to the backbone to allow users at thousands of universities, research labs, libraries, and museums to access any of the supercomputers and to communicate with one another. The complete network, including the backbone and the regional networks, was called NSFNET.

The first NSFNET backbone is illustrated below: 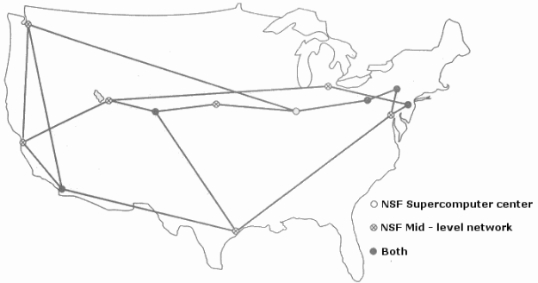 NSFNET was an instantaneous success and was overloaded from the word go. NSF immediately began planning its successor and awarded a contract to the Michigan based MERIT consortium to run it.

Fiber optic channels at 448 kbps provided the version 2 backbone. IBM RS6000s were used as routers. This too was soon overwhelmed, and by 1990, the second backbone was upgraded to 1.5 Mbps.

As growth continued, NSF realized that the government could not continue financing networking forever. Furthermore, commercial organizations wanted to join but were forbidden by NSF's charter from using networks NSF paid for. Consequently, NSF encouraged MERIT, MCI, and IBM to form a non-profit corporation, ANS (Advanced Networks and Services) as a step along the road to commercialization.

In 1990, ANS took over NSFNET and upgraded the 1.5 Mbps links to 45 Mbps to form ANSNET. In December 1991, the U.S. Congress passed a bill authorizing NREN, the National Research and Educational Network, the research successor to NSFNET. The goal was a national network running at 3 Gbps before the millenium. By 1995, the NSFNET backbone was no longer needed to interconnect the NSF regional networks because numerous companies were running commercial IP networks.

Every network operator that wanted to provide backbone service to the NSF regional networks had to connect to all the NAPs. So the concept of a single default backbone was replaced by a commercially-driven competitive infrastructure.

Other countries and regions also started building networks comparable to NSFNET. In Europe, for example, EBONE is an IP, backbone for research organizations and EuropaNET is a more commercially oriented network. Both connected numerous cities in Europe with 2-Mbps lines, the bandwidths were further upgraded. Each country in Europe now has one or more national networks, which are roughly comparable to the NSF regional networks.