The break-up of the $19 billion payout is structured as - $4 billion in cash, $12 billion in form of Facebook shares, and $3 billion in form of restricted stocks for WhatsApp employees. Even in this era of multibillion-dollar valuations for tech startups, the idea of paying $19 billion for a 5 year old mobile messaging service seems insane. 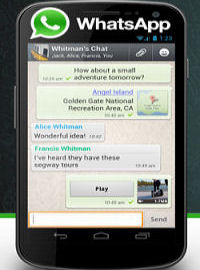 WhatsApp is a smart phone messaging service operating out of Mountain View, California. It is founded by Jan Koum (a Ukrainian) and Brian Acton (an ex-Yahoo employee), and has a small team of 50 engineers. The messaging service is lightweight, simplified and easy to use and is considered a better alternative to SMS. Users can send texts and photographs seamlessly and without paying the additional fees carriers charge for SMS service. The service is free to use for the first year, after which users are charged only 99 cents per year.

The company grew rapidly, and in a short span of less than 5 years it has created a 450 million user base, who send out 19 billion messages through the service and share 600 million photos every day. This growth is much faster than Facebook's own growth where it had acquired only 150 million users in its first 5 years of operation. Further, WhatsApp's user base is growing at a pace of 1 million per day. At that rate, their user base is expected to cross 1 billion in the next 2-3 years.


What did Zuckerberg get in his $19 billion shopping bag?

Zuckerberg clearly had his eyes on the 1 billion user base potential of WhatsApp. Facebook currently has an estimated user base of 1.2 billion and is facing a growth slowdown. The company suffers from the fear of losing its user base drastically to its competitors in the coming 5 years. Zuckerberg had therefore been on the lookout for an acquisition that can help him overcome this. Facebook has a very strong presence in North America (in the US & Canada). Nearly everyone in North America is now on facebook, not leaving much scope for new member additions. In order to keep growing, the company has to aggressively reach out to other parts of the globe. WhatsApp, on the other hand, has less presence in the North America and a strong presence in Europe, Asia (India & China) and Latin America. Some of you may not know that Facebook is blocked in China and are not able to tap this huge market at all.

Since, Zuckerberg plans to let WhatsApp operate independently as it is, this synergy could thus work to facebook's advantage as it seeks out its next billion users and also seeks to enhance its penetration in other parts of the world, especially the largely populated India and China. WhatsApp is the only widely used app that has more engagement than facebook and it also has a strong presence in India and China.

So the move to shell out $19 billion is indeed a very smart one. Don't you think?

Zuckerberg could also have had the fear that if he did not acquire WhatsApp, Google or someone else would. That would not only mean an opportunity lost but strengthening of its competitors would significantly dent facebook's current user base and accelerate its decline. After the acquisition, facebook is one up against Google's Hangout and Apple's iMessage.

With access to the WhatsApp user database, facebook will gain a massive amount of market intelligence on how international users think, what features they need and use, what products they buy, what devices and platforms they use, etc. This can really help facebook place its Ads well in the emerging markets and significantly increase its Ad revenue.

Yet, another advantage that facebook will have from this deal is due to the fact that WhatsApp is targeted towards mobile phone users whereas facebook is mostly PC centric. Only 300 million users access facebook from their phones or tablets. The mobile user population has been growing at a much faster rate than PC user population, thus opening newer doors for facebook. The acquisition positions facebook for even stronger growth on mobile phones, where advertising now makes up most of the revenue.