¤ Home » Leisure » Golf » Introduction to the Game of Golf

Introduction to the Game of Golf

If you have never set your foot on to a Golf ground (better referred as a Golf Course) and have often watched golfers play within the premises of beautifully landscaped lush green areas, or have watched the game on TV, you must be curious to know what this game that is played with metal sticks and a small sized ball, all about.

In this article, I will give you a beginner level introduction to the game of Golf.

Golf is a game that is played with one ball and a set of metal sticks (called Clubs) that look somewhat like a weird version of hockey sticks. Each player plays with his own ball and his own set of clubs (usually 14 in number). The entire game is played in a fairly large sized ground that has no particular shape and is spread over an area as large as 100-200 acres. So, why do they need such a huge ground to play this game when most other outdoor games (where you hit the ball with a stick/bat – such as cricket, baseball, hockey or even games where you hit the ball with your hand/foot such as basketball, soccer, etc.) are played in much smaller fields? Also, while most outdoor ball games are played between two teams, Golf is an individual game and each individual plays against his/her own strengths or weaknesses, referred as a handicap.

A Golf course comprises of a set of 18 Holes. Each hole is essentially an independent playing ground area where you begin your first shot on your ball from a designated starting point which is a raised grass platform (known as the Tee-off point) and finish at the other end by putting the ball into a hole created on another raised (normally) grass platform (referred as the Green). To reach from start to finish, on each hole, you may need to make 3-5 shots or more depending upon how good or bad player you are. The whole idea is to put the ball in each hole in minimum number of shots. The area in between the tee-off point and the green is referred as the Fairway. The fairway could have a width of 40-100 yards, though there is no hard and fast rule on its width. The whole idea for a player is to make his shots fairly straight so that his ball always lands on the fairway during the mid-course while reaching from tee-off to the green.

On and outside the edges of the fairway there would be various kinds of obstructions to raise the degree of difficulty, such as rough patches, bunkers, water bodies, bushes, trees, drains, water streams, etc. some of which are referred as hazards. So, while playing, it poses enough challenge for the golfer to hit the ball ensuring that it does not land onto such hazards or difficult patches from where taking the ball forward may become difficult. The real challenge in this game is that, before hitting the ball you have to determine where your ball should land and ensure that it lands there. Accuracy of distance and straightness of path are the two keys to being a successful golfer. 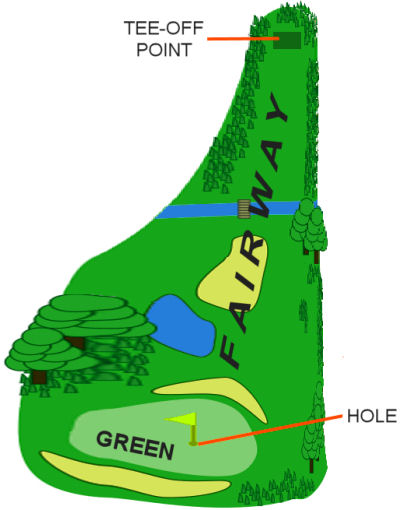 A Typical Hole in a Golf Course

The distance between the tee-off point and the green could typically vary from 150 yards to 550 yards (these are not sacrosanct figures). Depending upon the distance and the degree of difficulty encountered in reaching the ball from the tee-off point to the hole on the green, each hole will have a specified no. of shots that would ideally be achieved by a good golfer (referred as a Scratch Golfer). The specified number of shots is referred as a Par. For example, if a hole is designation as a Par 5, it means that if you are a good golfer you should ideally be able to put your ball in the hole in 5 shots.


A full sized golf course consists of 18 holes. A round of golf requires you to play all 18 holes. With each hole varying in length from 150 yards to 550 yards, while playing one complete round of 18 holes you end up walking around 5-6 km. No wonder many senior people prefer to play Golf as it provides gaming entertainment with good amount of exercise.

A typical 9-hole Golf Course may have a layout somewhat like shown in figure below. 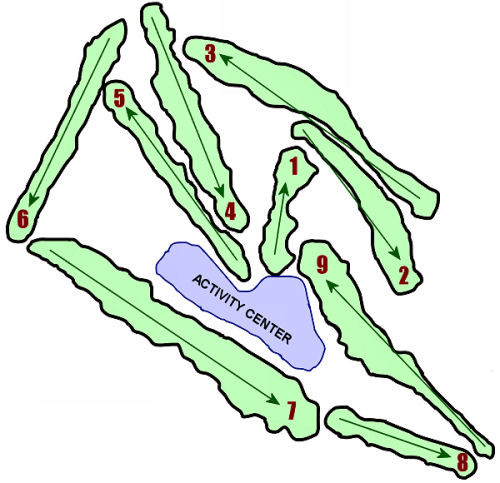 At the Tee-off point, viz. the starting point of each hole, you are allowed to place the ball raised on a plastic/wooden tee shaped peg which you carry with yourself and which is inserted in the ground to stand up. So, you get the advantage of hitting your best first shot on every hole. However, subsequent shots are to be played from wherever the ball lands, without moving its position. On the teeing ground, a pair of markers is installed to indicate the starting line. You can begin your first shot from anywhere within an imaginary rectangle formed by the width of the markers and a depth identified by two club-lengths. For ladies and seniors the tee-off line/rectangle is usually ahead, to give them a little advantage, considering that ladies and seniors generally have lesser muscular power than the men. A good golf course would also have a separate tee-off point for professional golfers giving them greater disadvantage than the casual/amateur players. Some courses may have separate tee-off platforms for each difficulty type. Others may have all on a single platform. In either case, the markers are color coded to indicate which imaginary rectangle is for which level of golfer.

The fairway is the pathway between the Tee-off point and the Green. It denotes the ideal route to be followed when playing each hole. Fairways are well maintained with short mowed grass, making it relatively easier for a golfer to play his shots. The areas outside the edges of the fairway (known as the rough) are minimally maintained and if your ball lands there it makes it difficult for you to play a good shot. The green is the point at which each hole terminates. On the green there is a hole (lined with a plastic cup) in which you have to eventually drop your ball. A flag placed in this hole helps golfer locate the green from far off distance.

The holes on a golf course are numbered 1 through 18, and that is the order in which they are played. The par for a golf course is the number of strokes an expert/scratch golfer is expected to make to complete one full round of 18 holes. Typically golf courses are designed for a par value between 69 - 74, the most common being par-70, par-71 and par-72. A casual golfer would normally complete playing the entire course in 90-120 strokes. The extra number of strokes that you require on an average defines your handicap.

So much for this first article. I hope this article would have helped give you an elementary perspective of what the game of Golf is. In subsequent articles I will expand on different aspects of the game and delve into it in more detail.