Mosquitoes have existed since 200+ million years and are a major nuisance. The word mosquito is a Spanish name given to this little fly. Europeans refer to them as gnats and Africans call them mozzies. They are the deadliest of all animals on Earth - across the world, mosquitoes kill an estimated 2 million people every year. They can carry deadly diseases such as dengue, chikungunya, malaria, yellow fever and encephalitis. If you have a Dog, you need to even protect your dog from this deadly insect, as mosquitoes carry heartworm, which is lethal for dogs. 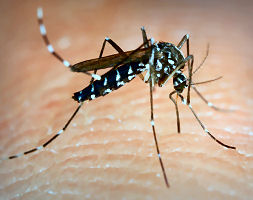 Around the world, there are 3500+ species of this deadly insect - the most common ones being the Anopheles Quadrimaculatus, the Culex Pipiens, and the Aedes Aegypti. Anopheles is the malaria carrier, and the other two spread encephalitis. The Aedes Aegypti, also known as the Asian Tiger mosquito, is the deadliest species and the prime carrier of Dengue and Chikungunya.

Not all mosquitoes are dangerous. You have to worry more about the female sex, which bite. Mosquitoes do not have teeth. The biting variety have a long pointed and serrated mouth called proboscis which consists of two tubes. One tube pierces the skin and punctures your blood vessel. Then blood is sucked through capillary action. The second tube pumps out saliva which is a chemical that contains a mild pain-killer and an anti-coagulant. Very scientific, isn't it?

The sore that you see on your skin after a mosquito bite, is caused by its saliva - some people have a mild allergic reaction to the saliva which causes the area to swell. A mosquito has the capacity to suck blood up to three times its own weight.

Do all mosquitoes bite?

How long does a mosquito live?

There is a general myth that mosquitoes live only for 24 hours. Wrong!

While male mosquitoes have a shorter life span of around 10 days (they are not harmful anyway), a female adult mosquito can live up to as long as 5-6 months, their average life span being around 2 months. The females lay eggs every 3 days during their life span and they can lay up to 300 eggs at a time. That is how mosquitoes multiply.

Mosquitoes also hibernate. They are cold-blooded and prefer temperatures over 27oC. During cold winters, at temperatures below 10oC, they shut down. The adults would find crevices or holes where they wait for the weather to become warmer. Some female species would lay their eggs in freezing water and die. The eggs stay until the temperatures rise, when they hatch.

How high can a mosquito fly?

The myth is that mosquitoes cannot fly higher than 15-20 feet. Absolutely wrong! Don't you see mosquitoes in high rise buildings?

Height is not an issue for mosquitoes. In general, mosquitoes that bite humans prefer to fly at heights of less than 25 feet. However, mosquitoes are found breeding in tree holes 50 feet above ground. They are even found thriving in high rise apartment buildings. Abandoned overhead tanks containing even 1 inch of stagnant water is an ideal breeding spot. To say the least, mosquitoes have been seen to be breeding as high as 8000+ feet in the Himalayas and as low as 2000 feet below ground in the mines.

How far can mosquitoes go?

Mosquitoes generally have a tendency to hang around their breeding location and would normally operate within 50-100 meters. However, in quest for food (blood and nectar), they may travel distances. Mosquitoes breeding on salty marshes are known to travel as far as 100-150 km. Mosquitoes can even cross continents by sitting in your travel bag.

Why do mosquitoes create the irritating buzzer like sound? Why can't they fly quietly?

A mosquito's wings vibrate 300-600 times per second. This frequency creates the buzzing sound you hear when a mosquito is flying around you looking out for a suitable spot to bite.

It is said that mosquitoes are attracted to shrubs, bushes and flowery plants. Is it true?

Since mosquitoes largely feed on flower nectar and plant juices, they usually hang around them. Further, mosquitoes prefer to rest in protected sites during the day, when they are not feeding. Shrubs and bushes are a safe hideout from predators (mainly birds) who feed on mosquitoes. If you have too much of dense vegetation in your garden, it would be a good idea to spray soapy water on them to reduce mosquito population.

How do mosquitoes find humans around? Can they smell blood?

We all know that humans inhale oxygen and exhale carbon dioxide. Mosquitoes have receptors on their antennae that can detect the released carbon dioxide from as far off a distance as 50-75 feet. Mosquitoes can also smell human sweat. Our skin releases a chemical called octenol which attract this little fly. The little fly is also known to be attracted towards skin lotions and perfume.

Mosquitoes are also equipped with heat sensors around their mouth parts which can detect body heat. You might have heard that mosquitoes are drawn towards darker clothing. The fundamental reason is that dark clothes retain more heat as compared to light colored clothing and it is this heat that attracts them.

Why are mosquitoes more active at night?

There is no hard-and-fast rule that mosquitoes only operate during the night. Mosquitoes that breed in accumulated water within your house may be active even during the day time. Mosquitoes that travel a little distance are generally more active during the night or at twilight hours. This is because of various reasons. During these times the environment is generally calm and less windy, helping mosquitoes in smelling CO2 or human sweat/perfume. It also helps them in flying more accurately in a targeted direction as otherwise they are too light and can be easily drifted by the wind.

Temperatures in the night and at dawn and dusk are conducive for mosquitoes as they are ectothermic, and highly susceptible to hot and dry ambient. They can easily overheat and desiccate under direct sunlight. Yet, another reason is that at night time, they are safe from predators such as birds.

This is a major concern for most of us. You must be wondering that if mosquitoes can carry and transmit other diseases such as malaria and dengue, can't they carry and transmit HIV as well. The good news is – they can't. A mosquito's mouth parts do not operate like a hypodermic needle. The tube which injects saliva on our skin is separate from the one which sucks blood. Therefore blood only flows into the mosquito and not out of it.

How to kill mosquito population?

The best method is to ensure that you do not have any stagnant pool of water around. Even a 1 inch thick water pool is sufficient for mosquitoes to breed. Some of the areas that we often ignore checking are within our own home, such as – the refrigerator's defrost tray, the air conditioner whose drain hole is clogged, the saucer on which we put flower pots to collect water, flower vases, vases for money plants, etc.

Add some liquid soap to water bodies which you are unable to keep dry all the time. Soap reduces the surface tension of water which drowns the mosquito larvae and hence they die because they cannot reach out to the surface to breathe.

If you are maintaining a pond in your garden, make sure to add a few varieties of rugged fish who feed on mosquito larva. Guppy and Gambusia are two breeds of fish which are quite rugged and have been successfully used to control mosquito growth. Also, make sure that the pond is free of weeds and algae that act as hideouts for the mosquito larva where fishes cannot reach them.

Commercial repellents are available in the market. The mosquito coil is a mosquito-repelling incense, usually shaped into a spiral, and typically made from a dried paste of pyrethrum powder. Pyrethrum is a natural insecticide made from the dried flower heads of Chrysanthemum cinerariifolium and Chrysanthemum coccineum. Liquid vaporizing repellents use chemicals like DEET (diethyl toluamide), allethrin group of compounds, herbs, oils, de-odorized kerosene, etc. The liquid vaporizers can be more harmful to humans than mosquito coils. They can potentially cause cancer and nervous disorder.


I hope this article has enlightened you a bit more on mosquitoes. Happy living with the little fly!