So far, we have dealt with programs involving variables, arrays, structures and unions, which are used for manipulating information resident in the main memory (RAM) of the computer. Information kept in the RAM is temporary in nature and is also limited in size - limited by the capacity of your computer's RAM. In order to build a practical application in C it therefore becomes essential that we have some means of storing our program data permanently. Such a storage is done in the form of files which can be stored in the backup media - such as disk drive or magnetic tape drive. Data stored in files can then be retrieved by the C program as and when needed.

C allows you to store data in files as plain text files or as binary files. In either case, a file essentially represents a stream or sequence of bytes. This sequence of bytes can be meaningfully read and used/displayed by a C program. It can also be manipulated, i.e. changed as per requirement of a particular application. In the next series of articles on C we will learn how to take advantage of C's file handling facilities to build more meaningful applications.

C provides a wide spectrum of standard library functions to allow you to implement data transfer between main memory of the computer (RAM) and external storage devices - such as terminal, printer, disk drive and tape drive. Such external storage devices are all treated as files and appropriate functions are called to perform read and write operations on those files. In fact, C treats all devices as files and using suitable library functions your C program can read from and write to various devices as if you were reading from and writing to files. 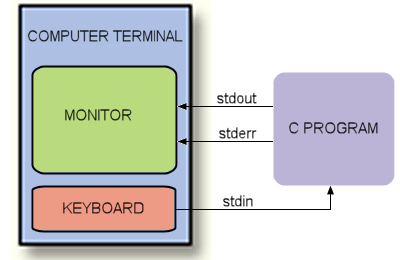 Once you understand the concept of file handling in C, you will be able to expand your knowledge to read streams of data coming in from any external device connected to a computer on which your C program is running. For instance, you may have a temperature sensor connected to an industrial furnace which would be reading the furnace temperature at 30 secs interval and dumping the read data as a steam of bytes to one of your computer ports to which the sensor is connected at the other end. You can then write a C program to open the port for reading, read the data coming into the port and store it in a file. This data (stored in file) can subsequently be read by yet another C program to display the furnace's temperature profile in the form of a graph. Such is the versatility of C that it is widely used for developing such practical applications.


Opening and Closing of Files

To maintain a uniform access method for different types of devices, C supports the concept of buffer, which is a data structure that provides necessary logical interface to the external files. Hence, when working with stream-oriented files, the first step is to establish a buffer area, where data can be temporarily stored while being transferred between the computer system's RAM and a disk file/external device. 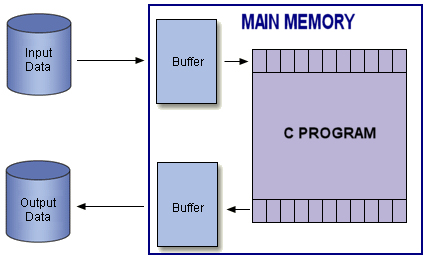 The buffer area is established by the following statement:


The FILE (all capitals) is a structure whose declaration is included in the stdio.h header file. Hence any reference to FILE inside a program, requires the following statement.


The typedef struct FILE is declared in stdio.h as follows:

Thus, the declaration FILE *fp;   means that the file pointer fp, points to a structure of type FILE, that contains information about the file, such as the buffer location, the current character position in the buffer, a flag indicating the mode in which file is opened, and a file descriptor. The members in the structure FILE receive values only if the file is opened successfully using fopen function.

The fopen() function is a standard library function that is used to open/create a file and associate an I/O stream with it. This function takes two arguments. The first argument is a string containing name of the file to be opened - it is essentially the full path to the file to be opened. When only file name is provided, it is assumed that the file resides in the same directory as your C program. The second argument is the mode in which the file is to be opened. Depending upon the mode in which you open the file, you will be restricted in the types of operations you can perform on the file, viz. read, write, append or rewrite.

The call to fopen(), if successful, establishes a connection between file pointer and the external file. If a file cannot be opened, fopen returns NULL value to the file pointer.


The table below lists the various modes in which a file can be opened:

The fopen() function allocates buffer and assigns the address of the same to the file pointer (fp) to enable carry out input-output operations on the file. It is always desirable to free the file pointer once the file operation is over and the pointer is no longer needed, since every operating system puts some restrictions on the number of files that can be opened simultaneously.

Closing of a file or in other words releasing the buffer that establishes connection to the external file/device, is performed by the standard library function fclose(). If an already opened file needs to be processed in a different mode it is always a better practice, to close the file and then reopen it in the new mode. The syntax of fclose() is as shown below:


Here is an example code snippet to give you an overview of the file handling program structure in C.


Here are a couple of programs that you can run to familiarize yourself with the paradigm of file handling in C.