The process of creation of an ordered singly linked list involves inserting a new node maintaining an order either ascending or descending. It revolves around three basic operations, viz.


To understand how to carry out the above three types of operations on a list so as to create an ordered list, let us look at an example.

Consider that we have to write a program which will take in words from the user and build a lexically ordered list. For ease of understanding, we will assume that the user provides the following 4 words – bat, mat, cat, ant.

When the program begins, the list is empty. So our start pointer will point to NULL.

The user now feeds in the first word, viz. bat. Since bat is the first node to be inserted, this node address is assigned to start.

To maintain the increasing order (lexically) the data for the next node mat is to be inserted after bat. Since there are no other nodes at present, essentially the node mat is appended at the end of the list.

To implement such an operation we use two pointers prev and curr. Both these pointers initially point to the first node of the list (same as start). Then curr is traversed to point to the next node in the sequence. The pointer prev will always follow behind curr and will remain one position behind. When initially curr is pointing to the first node, viz. bat, we compare the node element bat with mat and find that mat is lexically bigger than bat, so we move curr to the next node, letting prev remain one node behind. Now, prev points to bat and curr points to NULL. We know that prev->next will give us a handle to the pointer element of the first node. So, to attach mat after bat, we assign the address of mat to prev->next.

The next node to be inserted contains data ant, which is to be placed before the first element's data in the list i.e. before bat. Here the comparison with the first node indicates that the new node is to be inserted before bat that means the start needs to be redefined. This context is trapped by comparing the address of prev and curr. If both of them are stuck at start, it indicates insertion is to take place at the beginning.

Here is the full C program to implement the above. Review the program carefully and also run it to develop full understanding of the above concept.

1) A character string can be stored in a linked list where each node stores a character as shown below for the string The City of joy. 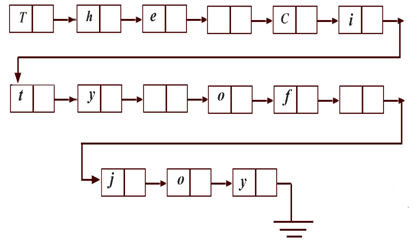 Write a C program to implement each of the following operations.


2) Write a C program to perform each of the following operations on linked lists.