The initial computer networks were designed with the hardware as the primary concern and the software as the secondary concern.

However, today, network software is highly structured. For reliable and error-free communication of information between two computers over a network, the enabling software running on both computers must follow a set of well defined rules and conventions (called Protocols).

So, the need for a standard set of protocols was felt so as to enable all kinds of computers with hardware and software from any manufacturer/ vendor to talk to each other over a network.

Hence, the International Standards Organization (ISO) has developed a standard model known as Open System Interconnection (OSI) reference model. The idea behind this standardized model is to provide for standardized procedure for exchange of information among terminal devices, computer, people, network, processes, etc.

Further, the design of such network communication software is rather complex as the software needs to take care of several issues that arise when two processes communicate across process boundaries.

Some of the important issues are:

To reduce their design complexity, most networks are organized as a series of layers or levels, each one built upon the one below it.

Layer n on one machine carries on a conversation with layer n on another machine. The rules and conventions used in this conversation are collectively known as the layer n protocol.

A four-layer network is illustrated below: 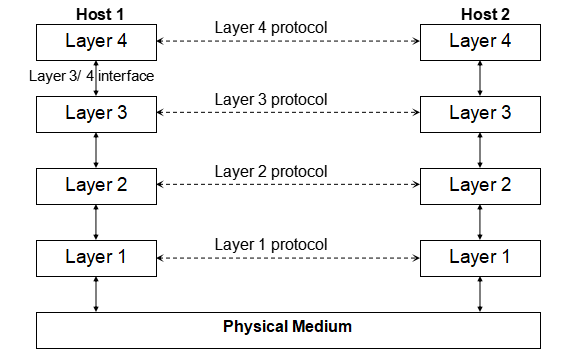 The function of each layer is to provide services to the layer above it.

The active elements in each layer are termed as entities.

An entity can be -

Services are available at Service Access Points (SAPs). The layer n SAPs are the places where layer n+1 can access the services offered. Each SAP has an address that uniquely identifies it.

The SDU is the information passed across the network to the peer entity and then up to layer n+1.

In order to transfer the SDU, the layer n entity may have to fragment it into pieces, each of which is given a header and sent as a separate PDU (Protocol Data Unit) such as a packet.

The PDU headers are used by the peer entities at the destination machine. These headers identify which PDUs contain data and which contain control information, sequence numbers, counts, etc.